Today, June 30, is my brother's birthday. Born in 1956, he was like a second family for my parents. There had been 4 girls and the youngest was 14. On the day that Kelly (my brother) was born, I was in Europe on a 3-month university study-tour scholarship. To be more precise, I was behind the Iron Curtain in East Berlin! I just dug our the copious notes I kept about that trip. Some day I must write a memoir...

Dacre Stoker and I will be signing copies of our book "The Lost Journal of Bram Stoker" at HODGES & FIGGIS Bookstore in Dublin (56-58 Dawson Street) on Friday July 6. We will start at 6:30 pm with a short slide presentation. 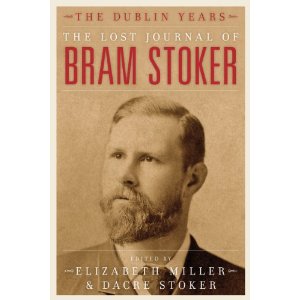 If you are in Dublin on the 6th, do join us.

In 4 weeks I will be in Dublin where more events are being planned for the Stoker centenary.

In addition, TCD and the National Library of Ireland are sponsoring a presentation on Bram Stoker's Dublin Journal by Dacre Stoker & myself. This event, open to the public, will take place at the National Library at 2 pm on Saturday, July 7. Several members of the Stoker family will be present.

There were several other centenary events that I did not attend, due to the fact that I have yet to figure out how to be in two different places at the same time. Dublin marked the event in a number of ways: the issuing of an Irish postage stamp commemorating Stoker; a conference on "Vampires and/as Science" held at Trinity College, a tour of the house where Bram was born in 1847 (in Clontarf), and a proposal for naming one of the Liffey bridges after Bram.

One event I especially regret having missed was the unveiling of a portrait of Bram by members of the Dublin Sketching and Painting Society. Bram was one of its founding members! Here is their tribute. (artist: Aidan Hickey) There are still a few activities planned for later this year. In early July (5-6) the English Department at Trinity College Dublin (Bram's "alma mater") will host an academic conference. I will be attending that one. In fact, Dacre and I will be presenting our slide show on the Journal at the National Library of Ireland on Saturday July 7 at 2 p.m. This event is open to the public.

Meanwhile if you'd like to read more about the centenary events (including press coverage), you should visit the website of the Bram Stoker Estate:
http://www.bramstokerestate.com

I will continue reporting on other events as they come to my attention. Until then... In the morning Dacre and I attended the symposium at Keats House where we presented our slide show on the Journal (see earlier entry). As part of its afternoon activities, Sam George and her crew had arranged a visit to nearby Golders Green. This is a special place for Stoker enthusiasts, and one which I had never visited. It is at Golders Green Crematorium (London’s first crematorium, opened in 1902) that Bram Stoker’s ashes are located. 
About 50 people joined us for this special event. It’s a wonder we all fit into the narrow space! But we did. We moved slowly around the quadrangle so that each of us would have our few moments standing right in front of the urn. It was a special time for each and every one of us. 
Appropriately, Dacre Stoker made a few comments to mark this moment followed by several of us who felt we had something special to say. Dacre & I left the conference attendees at this point and accompanied members of the Dracula Society with whom we were scheduled to spend the rest of the day and evening. Off we went to the Lyceum Theatre, Stoker's old stomping ground, for a tour and reception.
Here's a cross-section of photos: In the theatre with Jenne & Dacre Stoker 
After a light dinner with Dracula Society members, we once again gave a slide-show presentation, this time focusing a bit more on the Stoker family. It was enthusiastically received. A special treat! I was named the first recipient of a new award, the Bernard Davies award for long-term productive research. Here I am holding the award, a likeness of Count Dracula (as described in the novel).

Our book, The Lost Journal of Bram Stoker, was launched at a reception held on April 19, the eve of the 100th anniversary of Stoker’s death. The event took place at the offices of the publisher (The Robson Press, division of Biteback Publishing) on the 10th floor of Westminster Tower on the Albert Embankment. Rain had been threatening all afternoon and – appropriately, rumbles of thunder and flashes of lightning provided a backdrop to our revelries. Here is an interview in which Dacre Stoker and I explain the origins of the book and outline its contents:

Here are a few photos of the event. Dacre & I, with Richard Dalby Noel and I - with journal With the three great-granddaughters of Ellen Terry


Following the launch/reception, I was invited to a private dinner party with members of the Stoker family. A perfect end to a perfect day!

NEXT: events of April 20

The second conference in which Dacre and I participated was a symposium sponsored by the University of Hertfordshire. Organized by Dr Sam George, it was a much smaller affair than the gathering in Hull, thus allowing for all participants to attend all sessions.

The venue was unique – Keats House in Hampstead. Now Dracula fans will immediately recognize Hampstead (it was the region of north London where the “bloofer lady” roamed looking for fresh victims!) Keats House, a historic site, is where the famous poet lived during his last two years in England (before leaving for Rome where he died). It was here that Keats wrote some of his best-known poetry including his Odes.

In the display case were several relevant items: a first edition of Polidori’s “The Vampyre” (1819, published anonymously and believed at first to have been written by Byron), a first edition of Mary Shelley’s "Frankenstein" (1818) and letters Keats wrote to his beloved Fanny Brawne.

Dacre and I opened the symposium with our presentation on Bram’s Journal. As with the Hull conference, there were several very interesting presentations. Dr Catherine Wynne (organizer of the Hull event) spoke on “Bram Stoker and the Dublin Theatres in the 1870s” and Sir Christopher Frayling addressed the group on “Literature and Myth: the Visualization of the Gothic.” Other presenters included Kim Newman, Stacey Abbott, Kevin Jackson, Marcus Sedgwick, William Hughes and Ivan Phillips.

Segments of the various papers were videotaped and provide an excellent overview of the entire symposium. These videos can be found at:
http://implausibleblog.com/2012/04/23/bram-stoker-centenary-symposium


NEXT ENTRY: Book launch and reception in London

April 20, 2012 marked the 100th anniversary of the death of Bram Stoker. Numerous events were held to mark this special date. In this and subsequent entries, I will focus on events in which I personally participated, mentioning at the end some others that I have been made aware of. Feel free to add comments or questions.

The two weeks I spent in the U.K. to attend Stoker events were bookended by two academic gatherings: a Centenary Conference at Hull and Whitby (April 12-14), and a Stoker Symposium at Keats House in Hampstead (April 20-21). The Hull conference was a very large affair, with 3 – sometimes even 4 – sessions of papers running on parallel tracks. This, as academics know, can be a frustrating experience as one is forced to choose from several very promising papers. I did manage to attend quite a few, and especially enjoyed “The Legacy of Ingrid Pitt” (Victoria Amador), “Illustrating Dracula: The Hunt for the Count’s Moustache” (Bee Hughes), “Eiko Ishioka and the Orientalization of Bram Stoker’s Dracula” (Kathryn Bernal), “Dracula and Late-Victorian Religion” (Carol Herringer), and “That Smileless Laugh of Him: Humour and the Malice of Delay in Dracula” (Matthew VanWinkle). All of these (and many more, from what I heard of other papers) are publishable. Dacre Stoker and I do our joint presentation at conference

Dacre and I had been invited to this conference as keynote speakers to give a one-hour presentation entitled “Bram Stoker’s Dublin Journal.” This was the first time we appeared together for this purpose. (I had given a slide presentation on the Journal in March at the International Conference on the Fantastic in the Arts in Florida in March.)
Other keynote speakers included Sir Christopher Frayling, Prof Luke Gibbons, and Dr Joann Fletcher.

Held at the main campus of the University of Hull and superbly organized by Catherine Wynne, the conference attracted about 80 participants from several countries, including both well-known and up-and-coming names in the field of Stoker/Dracula studies. Papers were read by Carol Senf, Marie Mulvey-Roberts, Catherine Spooner, Stacey Abbott, Norbert Besch, Curt Herr, Marius Crisan, Mark De Cicco, and many others.

On the second day the conference moved to Whitby, about 90 minutes away. At Whitby. [This photo was taken during a previous visit to Whitby four years ago]

Whitby, of course, is central to the Dracula story as it was in Whitby that Stoker found the name “Dracula”. While visiting the town in the summer of 1890, he took close to 20 pages of notes for the novel that would be Dracula. Sir Chrstopher Frayling delivered his keynote lecture in Whitby in the form of a screening of his documentary “Nightmare: The Birth of Horror.” This was followed by a presentation on Stoker’s Whitby by David Pybus of the Whitby Library & Philosophical Society. Then we paid a visit to the Whitby Museum which had sent up a special display for us relating to Stoker’s Whitby connections. Here I learned a couple of interesting things. First there was in Stoker’s time no such place as the Whitby Public Library – but rather two private subscription libraries. It was one of these (or maybe both) that Stoker visited during the summer of 1890. And, more significantly, patrons could not browse the shelves: they had to consult a catalog and ask for a book to be brought to them. This has implications for how/why Stoker happened to select the book by Wilkinson where he found the name Dracula. Will have to give that some extra thought!

On Monday I will begin my account of the various events I attended during April to mark the centenary of Bram Stoker's death. Will include photos.

Just got back a few days ago from Orlando where I attended the annual International Conference for the Fantastic in the Arts. This year I was invited as guest scholar by the Lord Ruthven Assembly (a group within IAFA with specific interest in vampires and/or revenants) to mark the centenary of Bram Stoker's death.

My presentation (PowerPoint) was well attended and well received. I spent the first half of the allotted one hour showing photos of the Stoker family (including all of Bram's siblings), many of which have never been published. That, of course, is now changing with the release of the new book "The Lost Journal of Bram Stoker" (which I co-edited with Dacre Stoker). Also included were family mementos such as a bible given to Bram on his 11th birthday and various sports trophies that he won while a student at Trinity College.

The second half of the session was devoted to the newly discovered Journal that Bram kept during the 1870s. Most of the 310 entries (all transcribed and included in our book) were written while he was a young man still living in Dublin. They reveal much about the man as well as the writer.

The book will be officially launched in London on April 19. Next week Dacre and I will begin a hectic two weeks of talks and book signings throughout the U.K. I hope to post updates here as we go along - though photos may have to wait until I get home in early May.
Collapse